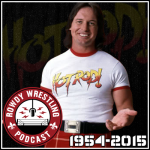 The passing of Rowdy Roddy Piper came on suddenly. He died in his sleep on the 31st of July 2015. On a personal note, it hit me (Tony) very hard. I was in a very weird mental space and was looking to make a big change.

The conversation you’re about to hear is the last recording I did for Main Event Radio. I decided I needed a change of air, and to do things on my own. Reflecting on the life of Piper, I noticed that is exactly how he lived his life: on his own terms. In a tribute to him, I named my podcast in his honour. I hope he wouldn’t mind!

Here’s a look back to the end of summer 2015 as Pat Laprade and I discuss the life and career of The Rowdy One, Roddy Piper!